A new release has made the scene, with his soulful voice and acoustic rhythm, GSoul has finally released his first-ever English-language EP called ‘Natural’, and we are head over heels. The album is one for the books; his overall vibe and lyrics could have anyone shedding tears with the amount of emotion that is felt as we all struggled through the same predicament, and have a few even falling in love. Many fans can agree that he has a voice so soothing, that he’s even known as Seoul’s very own “Pink Sweat$”. Those are incredible shoes to fill, but he does it remarkably with his title song “Natural”, and of course, it comes as no surprise since winning Mnet’s “The Voice Korea” in 2020, where he went by his real name Kim JI-Hyun. Recently, GSoul performed live at ‘Begin Again’ open mic with BIBI; performing their first duet song “Blue Inside You”.

“Natural” was MADE for romance, a ballad that has us thinking about that one person, “how natural it is to love them”; he expresses that he is willing to go to great lengths and endure any pain no matter what forces of nature threaten to keep them apart. ‘Natural’ was written during the pandemic, and many of us can relate to the depressing feeling of having to be away from our love, as the world begins to spiral. Many of the songs in the five-track EP shows different aspects of loyalty, love, and determination to come out of his comfort zone and relinquish the self-doubt in himself. From acoustic guitars in ‘Natural’ to the jazzy tunes we hear in ‘Another Day’, a song that represents a romance that seems too good to be true and how reaching this person seems unreal, but he prays nonetheless. 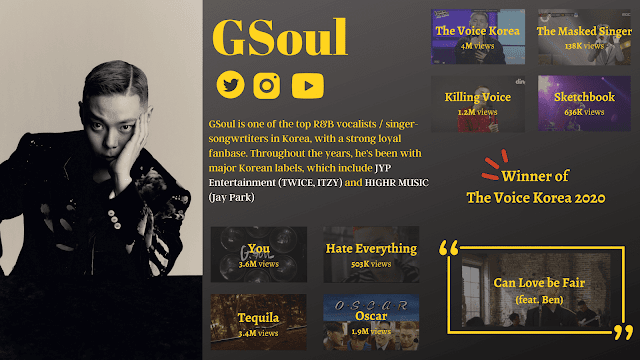 Tracklist:
01 Natural
02 By My Side
03 Free (I’m Gonna Be)
04 Another Day
05 Natural (Korean ver.)
Just when you think it couldn’t get any better, a music video was also released for ‘Natural’; which shows beautiful scenery of ocean waves and gorgeous landscapes, and GSoul is seen looking out into the changing world around him. Various lyrics that make up the track are seen on screen as different nature shots are shown conveying the emotions that each lyric holds. Regardless of the changes around us, his presence represents his undying devotion to his love, and it’s a fresh of breath air we didn’t know we needed. Check it out here now!

Gsoul has made Top Country on Instagram, YouTube, and Spotify all in the USA, a huge accomplishment for any artist. He first came to the scene in 2015 with his debut single ‘You‘, which made number 1 on Melon Music Chart, and since then he released one of his most streamed songs ‘Hate Everything‘ in 2019 post-military enlistment. Even with the challenges he faced due to the pandemic, GSoul never faltered to give his fans inspiring music with his melodic voice. Throughout this year he released tracks such as ‘Can You Be Fair’ Ft. Ben, ‘Stay:Tempus, which was part of the OST for K-Drama “Sisyphus: The Myth”, and his vocals are also featured in a remix of IV Jay’s ‘Vibrate’ that also included Pink Sweat$. His fanbase continues to grow as his authentic voice and original lyrics never disappoint.

Following the release, GSoul had a message for his fans listening to his new EP:

“What I love about my fans is that they get me like foreal foreal even when I’m silent. This project really is my message to my fans about how much I love them and how I’ve been. I think I used to just write and make music for me hoping someone would hear me. I just hope my fans feel my love for them from this project as much as I always feel their love and support. I’m so grateful.”

Check out more from GSoul and stay connected on Twitter and Instagram, we can’t wait to see what else he has in store for us in the future!

Stay updated on everything KPop, and hopefully, soon we will expand our audience into more genres.